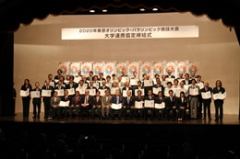 Photo session for the university representatives and athletes
On June 23, a signing ceremony for a university partnership agreement with the 2020 Tokyo Organising Committee of the Olympic and Paralympic Games and a commemorative symposium were held at Okuma Auditorium, Waseda University. Representatives attended the ceremony from approximately 260 universities (including Meiji University) out of a total 552 universities and junior colleges from around Japan that have concluded agreements so far (as of June 23). Confirmation was made of each university’s plans for collaboration and cooperation in a wide range of fields, including the promotion of related education, event publicity, and the training and production of athletes.
Back
News & Events