An event co-hosted by Meiji University and the U.S. Embassy “The Making of U.S. Public Policy – Inside President Obama ” 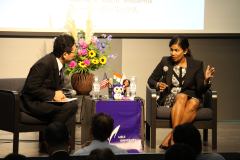 On September 9, Meiji University joined with the U.S. Embassy in Japan in hosting an event titled “The Making of U.S. Public Policy – Inside President Obama” featuring a speech by Ms. Rachana “Ruchi” Bhowmik, who formerly served as an advisor to President Barack Obama. The venue was the Global Hall on the Surugadai Campus of the university. The audience was engrossed by the lively dialogue between Ms. Bhowmik and Professor Motoo Unno (School of Political Science and Economics), who is researching policy in the Obama administration.
Back
News & Events