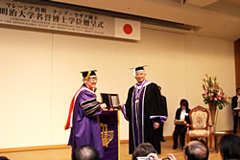 Meiji University presented an honorable doctoral degree to Malaysian Prime Minister Najib Razak on April 20. The degree is for those who have made outstanding contributions toward mankind in knowledge, arts and other fields. The presentation of the degree to Prime Minister Najib Razak is to cite his leadership and achievement in recovering the Malaysian economy and in improving the friendship between Malaysia and Japan. The ceremony was held in Liberty Hall at the Surugadai Campus.

“It is our esteemed privilege to cite the achievements of the honorable minister” said president of Meiji University Hiromi Naya in his celebration speech, and he expected a strengthening of the cooperation between himself and Prime Minister Najib to develop human resources to be dynamic in worldwide affairs.

Following the president‘s speech, Morihiro Nagahori, the chairman of the board of trustees, made a congratulatory speech expressing the hope to tighten the friendship of the two countries further. Also, Mr. Nagahori said that it helps Meiji University to make known its presence in the world.

Prime Minister Najib Razak gave thanks for “the honorable degree of tradition and achievement” from Meiji University and explained several policies now in effect. Also, the Prime Minister introduced the opening of a satellite office of the University of Technology Malaysia UTM at the Campus of Meiji University, and stressed the friendship between the two countries.

The international academic exchange between Malaysia and Meiji University started in 1984 at the request of the Malaysian government. The exchange continues in the fields of education, research and social cooperation. In 2007, Meiji University opened a satellite office at the campus of UTM.

Prime Minister Najib Abdul Razak was born in Pahan, in 1953. Graduating from the University of Nottingham, Great Britain, in 1974, he was elected representative of the lower house in 1976. He also served in Malaysia’s major cabinet post, and he became the 6th Prime Minister of Malaysia in April of 2009.
Back
News & Events