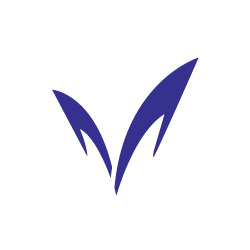 In 2001, we prepared the Meiji University symbol mark as a token of our resolve to embark on a new round of advancement with the arrival of the new century and the approach of the 120th anniversary of our founding. The mark symbolizes Meiji University as a university that is making a big leap and ascending while carrying on its 120-year tradition and heading into the new century. Meiji University issued a call for design entries, and selected the symbol mark from among them.
Taking the “M” of “Meiji” as its motif, the symbol mark is based on the conceptual image of “constantly leaping forward.” It has a readily accessible appearance deriving from its simple design, and conveys a “message for the future” through a novel approach. 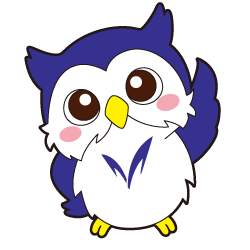 Meijiro, the official mascot of Meiji University, is based on the motif of an owl, which has long been associated with wisdom. It features wings that are bluish purple, the school color, and large eyes that see far into the distance. The name “Meijiro” is a coinage from “Meiji” and “fukuro,” the Japanese word for owl.
The design was determined in March 2007, after selection from among entries submitted by students, teachers and administrative staff. Initially, Meijiro was used as the mascot of the Public Relations Office. Because it found favor as a graphic manifestation of Meiji University’s endearing image, it was “promoted” to the status of official mascot in 2009.
Meijiro is extensively active as a “publicist” for Meiji University, appearing on all sorts of goods and in the form of a real character at events.

Use of the symbol mark, logo, Meijiro and other trademarks