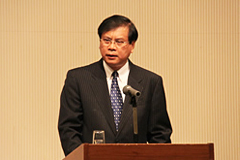 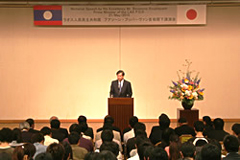 The prime minister of the Lao People’s Democratic Republic, Mr. Bouasone Bouphavanh, came to deliver a lecture enititled ‘The sustainable development of Laos and expectations from Japan’ at Meiji University’s Liberty Hall on the Surugadai Campus on May 21st, 2010.

Prime Minister Bouasone studied in the former Soviet Union and holds a degree in political science. He has risen up the party ranks of the politburo and central committee and held positions such as third deputy secretary and first deputy secretary, before becoming prime minister in 2006.

Meiji University has previously welcomed Lao dignitaries including the foreign minister and minister for education. Meiji University has also developed a close international academic exchange with Laos through its links with the National University of Laos. Meiji has sent many academic staff to the National University of Laos in order to assist with developing the area of telecommunications in the School of Engineering, to support operational management and information development at the library and to provide guidance on running schools. We hope this visit from Prime Minister Bouasone will help us develop even stronger links between Laos and Meiji University.
Back
News & Events