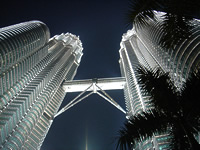 The Institute of Technology Petronas Sdn. Bhd. is a relatively new university established in 1995 by PETRONAS, Malaysia’s largest and one of the world’s foremost oil companies. The Institute comprises eight departments and 13 specialties mainly in the field of science and engineering, but in view of the circumstances of the Institute’s establishment, its signature specialty areas are petrochemical studies and resource management studies. The Institute actively accepts students from overseas, and the ratio of foreign students has reached 15% of the total student body. The international image of the Institute is further enhanced by the large number of instructors invited from India, Bangladesh, and Japan, among other countries. Currently, the Institute of Technology Petronas Sdn. Bhd. is recognized as an educational university based on the standards of the Government of Malaysia, but there are plans for its promotion to a research university within the next several years.

Over the past few years, Meiji University has been engaged in exchange with the Institute of Technology Petronas Sdn. Bhd. through acceptance of Malaysian students who come to Japan to study on scholarships provided by PETRONAS. Going forward, the two universities are expected to engage in vigorous exchange activities, including mutual interchange of students and researches.
Back
News & Events