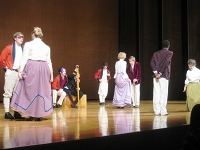 On October 2, the Headquarters of International Collaboration invited the Pembroke Players, a student theater troupe from Cambridge University, the United Kingdom, to the Surugadai Campus and held a dance workshop in the Multi-Purpose Sports Room in the Liberty Tower.

Pembroke Players is a distinguished theater troupe that has produced many famous performers since its founding in 1955. The workshop was planned and held before the performance of the Shakespeare play Much Ado about Nothing by the troupe in the Academy Hall in the early evening of the same day. Over 50 Meiji University students, including members of the Meiji University cultural project, gathered in response to the announcement by the Headquarters of International Collaboration to participate in the workshop.

At the workshop, the dance lesson was started immediately after the extremely humorous self-introductions by the members of the theater troupe. The participants were divided into four groups and were given lectures by the theater troupe members personally about the dances featured in Much Ado about Nothing. At the end of the workshop, each group presented the results of practice to the other groups. In spite of the fact that they only had the short time of one and a half hours to practice, some of the Meiji University students mastered the dances with their natural energy and positive attitudes. The students also gave an improvised performance of Soran Bushi in response to a request from the troupe to see Japanese dance. Transcending the language barrier, the Meiji University students and Cambridge University students were able to completely open up to each other, and the workshop ended with cheers and applause.

One participating student said with an expression of fulfillment that “I am not very good at dancing nor English but the members of the theater troupe taught us in a considerate and friendly manner. So I was able to participate without getting nervous. Each of the randomly-formed groups became like one team as we practiced, and I felt a bond of solidarity with the students as they danced according to the count.”
Back
News & Events