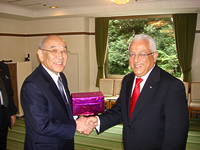 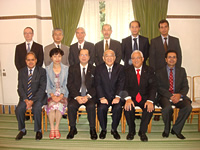 Minister of Higher Education and Scientific Research of the Republic of Tunisia Bechir Tekkari paid a courtesy visit to Meiji University on October 7, 2010 (Thursday). Minister Tekkari was accompanied by H.E. Dr. Nouredine Hached, Tunisian Ambassador Extraordinary and Plenipotentiary to Japan and Dr. Abdelwahed Ghorbel, Director of the Borj Cedria Science and Technology Park. The visit lasted approximately one and a half hours, and was organized as a luncheon party held in a friendly, relaxed atmosphere.

Meiji University was represented by President Hiromi Naya and Vice President Etsuko Katsu, who participated in the luncheon party, together with Yoshiharu Oshikiri, trustee of the Association Japon-Tunisie and a graduate of Meiji University.

The guests demonstrated strong interest in the initiatives implemented by Meiji University in water-related technologies, an area that is inextricably linked with Tunisian culture, and the discussion covered topics such as the status of water resources and seawater desalination projects in Japan and Tunisia. Furthermore, the two sides exchanged information with focus on scientific and agricultural technologies, such as photovoltaic power generation plans and vegetable cultivation techniques.

Minister Tekkari expressed his aspirations to expand Japanese-language education in Tunisia in the future so that Tunisians can study Japan’s science and technology. Professor Jemaiel Ben Brahim, President of the University of 7th November at Carthage, who also participated in the meeting as part of the Tunisian delegation, explored issues of common concern, and expressed his intent to realize university-level cooperation in the future.
Back
News & Events