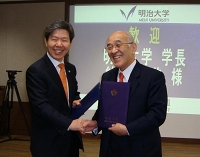 The scene at the lecture 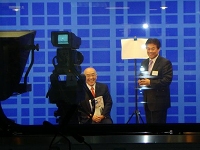 After the signing ceremony, President Naya gave a special lecture entitled Higher Education in Japan: the Current Situation and Challenges (Prospects). The Yeungnam University faculty members listened to the lecture intently and a lively exchange of opinions took place in the question-and-answer session after the lecture. After the lecture, the delegation led by President Naya visited the e-Learning Support Center, where they discussed the current state of e-learning at both universities, saw a demonstration of Yeungnam University’s e-learning system solution, and inspected the studio in the e-Learning Support Center.

Going forward, in addition to research exchanges in many academic fields, the two universities are expected to engage in even more vigorous exchange activities involving the active utilization of e-learning in education led by the e-Learning Support Center, the characteristic approach of Yeungnam University.
Back
News & Events