Dialogue among Vietnamese and Japanese Universities Held at Meiji University 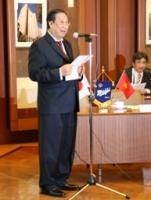 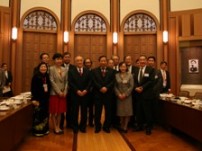 On November 12, Dialogue among Vietnamese and Japanese Universities was held in Kishimoto Tatsuo Memorial Hall on the 23rd floor of the Liberty Tower on the Surugadai campus.

The event was held to further promote exchanges between Japanese and Vietnamese universities, on the occasion of the visit to Japan by major Vietnamese university presidents who accompanied the President of Vietnam Nguyen Minh Triet attending the APEC summit.

The event opened with welcome remark by Hiromi Naya, President of Meiji University, and then the keynote lecture entitled “Higher education reforms in Japan in response to globalization” by Mr. Naoki Himiya, Director of the Higher Education Bureau of the Ministry of Education, Culture, Sports, Science and Technology was made. After brief introductions of the participating Japanese and Vietnamese universities, an active exchange of opinions took place regarding the initiatives being undertaken by each university to achieve internationalization.
Back
News & Events