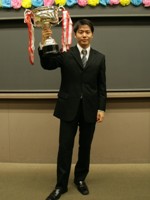 Gao Yang, the winner of the President’s Prize 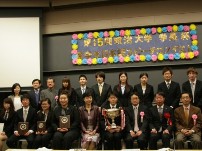 The 15th Meiji University President’s Cup Japanese Speech Contest for International Students was held on the 20th of November at Liberty Tower on the Surugadai Campus by the International Student Exchange Center and the Parents' Association. A total twelve students from South Korea, China and United States gave speeches. Each speech was limited to five minutes and President’s Cup was won by Gao Yang a third year student at the School of Information and Communication from China, whose speech title was “Learn from our pioneers”.

In the lead up to the speech contest a 40 student planning committee assisted the international students with writing and practicing their speeches. The committee also assisted with public relations, setting up the venue and making sure the contest was a success.
Back
News & Events