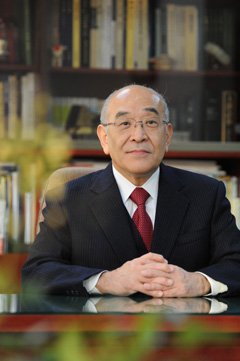 In 2010, Meiji University rose to new prominence and heights with accomplishments such as becoming the top university in Japan for the number of applicants taking general entrance examinations. I would like to express my gratitude for your continued understanding and cooperation in enabling us to record these successful achievements.

In 2011, Meiji University will celebrate its 130th anniversary with the basic theme of “To the World”—a phrase that also captures our desire to set out on the path of the next 20 years, looking forward to the university’s 150th anniversary.

The world today is being rocked by paradigm shifts. We witnessed the receding of the Cold War between the United States and the Soviet Union, which emerged out of World War II. Then the crumbling of the Berlin Wall in 1989 led to the emergence of the U.S. as a single superpower. However, this hierarchy is beginning to crumble as the global order moves toward a flatter hierarchy. At the same time, the outlook for the future remains uncertain, as we continue to search for a central model for society.

The situation facing the international community is also transforming the environment for universities. Now is a time when we must hold on to our traditions, which is to say the founding principles of Meiji University, so that we can respond to new needs while grounded in a view of the future.

Personally, 2011 represents the last academic year of my second term as university president. During my tenure, I have advocated the vision of a university that can withstand external evaluation and is open to the world. We have accepted the challenge of pursuing university education reform through a variety of projects implemented by the Ministry of Education, Culture, Sports, Science and Technology (MEXT) including Good Practice (GP), global centers of excellence (GCOE), and Global 30 (G30) programs, respectively. I believe that our efforts to achieve university reform at Meiji University have been well-received, both internally and from outside the university.

Looking ahead, we will bring renewed commitment in our efforts to establish a university environment that increases the sophistication and globalization of our education and research, as we endeavor to mold Meiji University in the image of a university that reaches out to the world.

We are looking forward to successfully phasing in new undergraduate schools, graduate schools, and courses of study that have already been approved by the university. This includes launching the Graduate School of Advanced Mathematical Sciences in fiscal 2011. We will also work to ensure that development projects such as the Surugadai Research Laboratory Tower (provisional name), the New Izumi Library and the New Educational Building D at the Ikuta Campus are completed on time, in order to support these new endeavors.

We look forward to your ongoing support as we work to secure the future of Meiji University as a sustainable university. In closing, let me extend my wishes for your happiness and good health in the New Year.