2011 Symposium Series organized by the U.S. Embassy in Japan was held 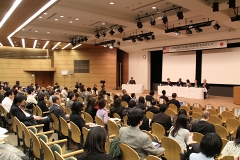 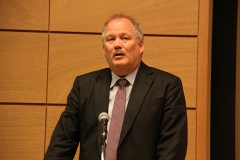 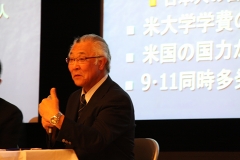 “Strengthening Educational Exchanges between Japan and the United States” is a forum series hosted by the United States Embassy in Japan. The inaugural symposium was held on February 28 at the Surugadai Campus Liberty Hall, with Meiji University and the Japan Network for International Education (JAFSA) serving as co-hosts.

The event was planned in response to a situation in which the number of Japanese students studying in the U.S. has declined by almost one-half during the past decade. The aim was to exchange views on the roles that both countries’ university educators should play to revitalize bilateral educational exchanges. The inaugural symposium was held under the theme of “U.S. Higher Education and Best Practices among Japanese Universities—What Are the Challenges to Overcome?”, and proposals to reverse the declining trend were made by members of the U.S. Embassy; the Ministry of Education, Culture, Sports, Science and Technology (MEXT); JAFSA; and representatives of Meiji University.

In opening the symposium, Mr. Phillip P. Hoffman, Minister-Counselor for Public Affairs at the U.S. Embassy in Tokyo, gave a welcome address as the organizer, offering his congratulations on the holding of the commemorative inaugural symposium at Meiji University, which is celebrating its 130th anniversary. He also emphasized the importance of promoting and strengthening international educational exchanges not only between the U.S. and Japan but among all the countries of the world, noting that nothing is more effective than educational exchanges for solving the various issues and circumstances that the international community currently faces.

In the Keynote Lecture, Dr. Robert Waters of the University of Maryland stated that it is essential for young students to understand international issues, and that it was the responsibility of universities to demonstrate leadership in making this happen. He then described the current status of higher education in the U.S. while showing data on the demographic changes within the country and the diversifying trends of overseas exchange students. In response, representatives from various Japanese universities that send students to the U.S., including Ritsumeikan, Waseda and Meiji, presented reports on good practices for international exchange.

Giving a presentation on behalf of Meiji University, Kosaku Dairokuno, Dean of the School of Political Science and Economics, first described the programs carried out by the School of Global Japanese Studies and the School of Commerce, and explained the activities carried out by his School as an advanced case example within the university. Noting that the School of Political Science and Economics aspires to provide education of a global standard that equips students with the abilities to understand cultural and other differences, act independently and with self-reliance, and link knowledge through to actions, he cited activities that illustrate the School’s principle of globalization, such as the enhancement and expansion of specialty courses held in English by non-Japanese teachers, and international exchange programs with Northeastern University and University of Southern California.

The ensuing Panel Discussion was carried out by encouraging active audience participation. The panelists exchanged views with over 300 people in the audience on the reason for the decline in the number of Japanese students studying in the U.S. An especially interesting and provocative comment came from an individual in the audience who said, “The mass media’s claim that Japanese youths are inward-looking is not true at all. Young people are not the only ones responsible; this is a problem comprised of multiple elements. It should also be pointed out that, over the past decade, no social structures have been established, such as those on the corporate side, to encourage and support young people to go and study abroad.”

Lastly, Dr. Waters called on the students to go out into the world and study, to make sure that both Japan and the United States can maintain their international competitive edge and comparative advantages, and thus concluded the lengthy forum.
Back
News & Events