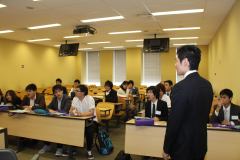 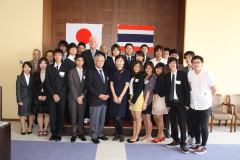 Mr. Virasakdi Futrakul, the Ambassador Extraordinary and Plenipotentiary of the Kingdom of Thailand to Japan 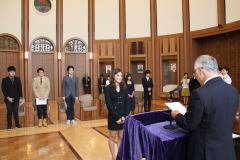 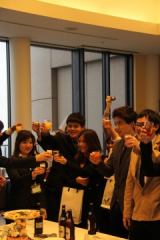 Farewell Party
The School of Political Science and Economics, Meiji University, hosted 9 short-term exchange students from Srinakharinwirot University, Thailand on May 2. This is the first exchange program among students between two universities.

During their stay in Japan, they learned Japan’s political science and economics through such courses as Japanese Government and Politics: From a Perspective of Center-Local Government, Public Finance in Aging Society and Japan’s Foreign Policy in Transition: Seeking for the Ways of International Contribution.

Moreover, students of both universities deepened exchanges through a tour around Tokyo such as Tokyo Stock Exchange and Diet and a joint workshop at Yamanakako Seminar House.

At the Commencement Ceremony held on May 27, the Ambassador Extraordinary and Plenipotentiary of the Kingdom of Thailand to Japan, Mr. Virasakdi Futrakul celebrated their completions of the course at Meiji University.