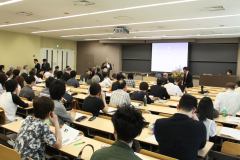 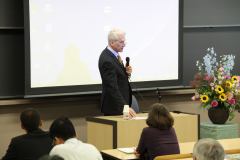 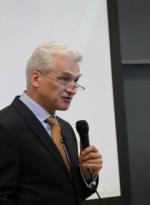 Meiji University President Hiromi Naya opened the day’s events by stating that in the course of its modernization, Japan had learned much from Germany and it was not an exaggeration to say that German systems in various fields had created the foundation of Japan as a country. He expressed his great joy to have the opportunity for interaction between Germany and Meiji University.

Next, Dr. Volker Stanzel, Ambassador of the Federal Republic of Germany to Japan, gave a lecture in fluent Japanese entitled “150 Years of Japan and Germany.” During his lecture, Ambassador Stanzel explained how the two countries, so far apart geographically as well as politically and culturally, have remained the most important partners for each other in Europe and Asia, respectively, for 150 years.

He suggested that the people of the two countries who share mutual trust and interaction at the academic level were the two things that would become a great force in solving various issues being faced at the global level, such as environmental issues, nuclear disarmament, ensuring global security, and ensuring a stable supply of resources and energy.

From the early 1990s the number of Japanese students studying in Germany has increased by about 50% and the number of German students in Japan by 40%. The ambassador concluded his lecture by encouraging the audience to make the 150th anniversary of Japanese-German relations an opportunity to create a new relationship between the two countries.

Finally, lectures were held by three Meiji University researchers who had studied in Germany, including Professor Seiji Sawada of the Department of Architecture, School of Science and Technology. These lectures concluded German Day, which lasted for a total of four hours.