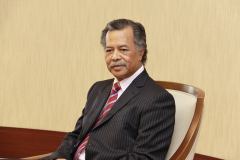 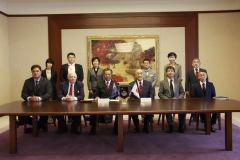 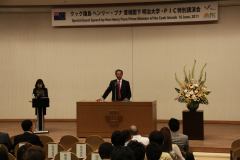 On 16 June 2011, Meiji University and the Pacific Islands Centre (PIC) invited Prime Minister Henry Puna of the Cook Islands in the South Pacific to hold a special lecture at Liberty Hall on the Surugadai Campus.

After having met with University President Hiromi Naya and other university officials, Prime Minister Puna gave a lecture entitled “Toward strengthening ties between the Cook Islands and Japan.” The audience, which included many students and university staff, deepened their understanding of environmental and other issues faced by the Cook Islands.

At the start of the lecture, Prime Minister Puna expressed his condolences to the victims of the Great East Japan Earthquake. He also expressed his affinity with the university saying, “As a lawyer myself, I feel close to Meiji University which was originally a law school. I emphasize with the university’s attitude of promoting global mutual understanding, expressed through actions such as actively inviting government officials from various countries to hold lectures.”

Professor Tetushige Nishio of the School of Law moderated the lecture and Prime Minister Puna introduced the geographical environment and historical background of the Cook Islands. He also introduced its major industries, such as tourism, financial services, pearl cultivation, and deep sea fishing. He stated that “Japan and the Cook Islands are both islands countries in the Pacific Ocean and the importance of marine resources and the marine environment is something we have in common. I believe in the development of the relationship between our two countries in order to ensure food security and to develop renewable energies.”

Prime Minister Puna sounded a warning call especially in regard to the response to global warming and expressed his motivation by saying, “If the sea level rises a few centimeters due to global warming, the Cook Islands may face devastating effects. Our government is in complete favor of renewable energies and we aim to shift 50% of domestic energy to renewable energies by 2015.” He also expressed his expectations for the introduction to the Cook Islands of technologies and knowledge from Japan.

One student attending the lecture stated “I am interested in Polynesia and Micronesia. It was very interesting to learn about the current situation in the Cook Islands, which is something you do not hear about every day” (male, third year student, School of Commerce). This and other such comments showed the students’ increased interest in the Cook Islands thanks to this lecture.

The Cook Islands are a tourism-oriented country comprising 15 islands situated about 3,000 km northeast of New Zealand, between Fiji and Tahiti. Its land area is about 237 square kilometers (about the size of Tokunoshima Island in Kagoshima prefecture). Rarotonga Island, where the capital of the Cook Islands, Avarua, is situated, is called the Pearl of the Pacific and boasts vast white sandy beaches. The Cook Islands is in free association with New Zealand and New Zealand retains responsibility for the Cook Islands on issues of defense, etc.

The Hon. Henry Puna was born on 29 July 1949 and is currently 61 years old. After serving as Chief Legal Advisor to the government of the Cook Islands as legal officer in the Office of the Legislative Service, he served as Secretary of Trade, Labour, and Transport, and Secretary of Tourism and Transport. Prime Minister Puna has also been involved in pearl cultivation for a long time. He was first elected to Parliament in 2005 and in November 2010 he became Prime Minister of the Cook Islands.

The Pacific Islands Centre (PIC)
The PIC is an international organization that seeks to promote trade, investment, and tourism between Japan and the members of the Pacific Islands Forum (13 countries and one region). Established in October 1996, the PIC currently has an administrative office on the Surugadai Campus of Meiji University (first floor of Shikon-kan).