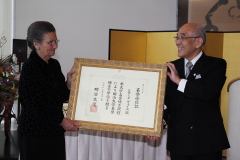 On September 1, at the Japanese Embassy in France, Meiji University presented its honorary doctorate to Ms. Simone Veil, a member of Académie Française, honorary president of the Foundation for the Memory of the Shoah, former Minister of Health of the French Republic, and former President of the European Parliament. This was in recognition of Ms. Veil’s social achievements as a politician and lawyer, in particular, the exceptional contributions she has made to protect human rights and promote world peace and advancement of women.