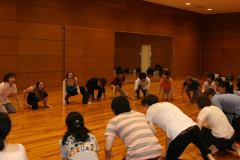 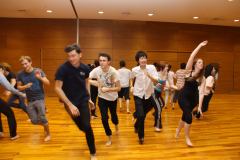 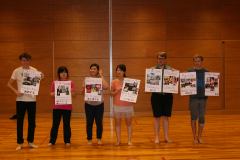 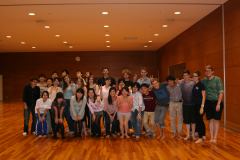 The Meiji University Headquarters for International Collaboration invited the student theater group, the Pembroke Players, from the University of Cambridge in the United Kingdom, and held a workshop at the Liberty Tower on the Surugadai Campus on September 26.

Since its establishment in 1955, the Pembroke Players has produced many famous actors. This workshop was held in order to deepen Japanese students’ understanding of Shakespearean theater and 15 Meiji University students participated.

The workshop started right away under the tutelage of the frank and friendly actors. The participating Meiji University students carefully expressed abstract themes such as a storm, a carnival, and a jungle, using only sound and the movement of their bodies, exercising their inherent adaptability and assertiveness to a great extent. Following this, they divided into several small groups and received a lecture on dancing in Twelfth Night and then each group practiced dances based on different themes for a short time. Finally, they displayed the superb results of the workshop.

The workshop, which was held completely in English, ended after an hour and a half amid cheers and applause. There was an air of excitement in the multipurpose sports room where the workshop was held.

One participating student said with a refreshed expression, “I am in a theater circle and I heard about last year’s workshop from someone and was interested. Professional workshops are expensive, but a workshop like this is for free and you can participate and enjoy it easily and you can make friends from abroad. I am not good at English, but I truly enjoyed it.” One student who had participated in the Cambridge University Summer Law Course this summer and had also taken members of the Pembroke Players to Kamakura and Akihabara and engaged in further interaction with them said, “Sharing the fun and difficulty of expression using only the body with the actors with whom I have become friends made a good memory for me.”