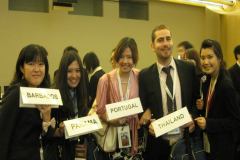 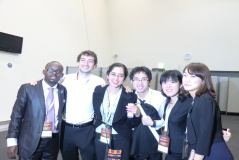 The Model UN is a program in which participants role-play as diplomats representing different countries and deliberate on international issues from the perspective of the respective countries as in an actual UN conference, and experience processes from formulating agreements to the adoption of a final resolution.

The Global Model UN, hosted by the United Nations, was first held in 2009 as a world conference for the Model UN, and the Incheon conference was the third conference. This year about 400 university and graduate school students from across the world, including 16 participants from Japan, gathered to deliberate in English on the theme of “Sustainable Development: Advancing Human Progress in Harmony with Nature.”

I participated in the Global Model United Nations (GMUN) conference held in Incheon, Republic of Korea, as a member of the Japan Model United Nations (JMUN) delegation. The GMUN is the only Model UN conference hosted by the United Nations annually since 2009. This year’s theme was “Sustainable Development: Advancing Human Progress in Harmony with Nature,” and about 400 students from about 60 countries around the world engaging in Model UN activities participated. For students engaging in Model UN activities, the GMUN has more significance than just displaying the results of their daily efforts. It is an extremely precious opportunity—much like participating in the Olympic Games.

I participated as a delegate of the Government of Barbados in the Second Committee of the UN General Assembly (Economic and Financial Committee) and deliberated with about 70 students role-playing delegates from various governments on the themes of “ensuring global food security through sustainable agriculture” and “improving market conditions in favor of alternative energy towards a green economy.”

Barbados is a small island country in the Caribbean Sea with a population of about 250,000. Its main industries are agriculture and tourism and it is the most economically developed of the Caribbean countries. In formulating policies for this small country, I keenly felt the difficulties in participating in the decision-making process of the international community. Furthermore, at the GMUN, in addition to the meetings of the first to fourth committees, there is the Security Council meeting, making a total of five meetings. Excluding the Security Council member countries, normally, four delegates from each country are responsible for each committee. However, the other students who were supposed to represent Barbados along with me were not able to raise the funds and could not come to the GMUN. Therefore, I had to participate in the adoption of the resolutions for each committee. It’s the United Nations. At actual UN meetings as well, not all member states are able to send government delegates to each committee. At the GMUN, I asked people representing countries with similar policies to Barbados about how the committee meetings went and cast my vote. In the end I think that I was very lucky to have been able to feel for myself the atmosphere of each committee.

I gained three things through the GMUN conference. First, more than anything, I was able to feel closer to the United Nations. UN Secretary-General Ban Ki-moon stated in his keynote speech during the opening ceremony, “You are an important part of the solution. The world needs your active engagement. Twenty years from now, my generation will largely have left the scene. You, here today, will stand in our place, very soon. How the world looks in 2031 will depend largely on the decisions we make now, in 2011. Whatever decision you make now, whatever decision we make together, will determine the future in 20 years. Yes, technology offers solutions. But I prefer to put my faith in people, young people in particular.” In other words, the United Nations is trying to convey the voices of students to the international community through the GMUN.

Second, by engaging in one challenge along with excellent students from all over the world who will take responsibility for the next generation, I became conscious that I myself am responsible for creating the future. I was able to feel the high level of awareness of other students from abroad all throughout the conference. I was stimulated by their persistent negotiations until the end with conviction and their stance of seeking to change the world for themselves.

Before participating in the GMUN conference, I was very nervous about participating for the first time in a MUN conference held overseas. However, now I have the feeling that one day in the near future I may work somewhere in the world with the GMUN participants I met on this occasion. In facing numerous international issues in the future, I will continue to tackle them with conviction.