Federal Minister of Education and Research of the Federal Republic of Germany, Annette Schavan, is Presented with an Honorary Doctorate 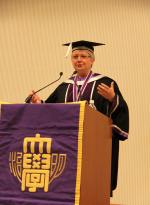 On October 3, Meiji University presented the Federal Minister of Education and Research of the Federal Republic of Germany, Annette Schavan, with an honorary doctorate. The honorary doctorate was presented in recognition of the minister’s great contribution to the development of mutual understanding, academic exchanges, and cultural exchanges between Japan and Germany through the active promotion of academic and cultural exchanges between the two countries. Minister Schavan is the 29th person to receive an honorary doctorate from Meiji University.

At the presentation ceremony for the honorary doctorate, held at Liberty Hall on the Surugadai Campus, President Hiromi Naya introduced Minister Schavan’s achievements in the development of academic and cultural exchanges between Japan and Germany. President Naya stated, “This opportunity to recognize Minister Schavan’s achievements is highly significant to Meiji University as it strives to develop its education and research activities to be more appealing internationally.” President Naya added that he hoped that this presentation of an honorary doctorate would contribute to strengthening mutual understanding and friendship between Japan and Germany, which celebrated the 150th anniversary of the establishment of diplomatic relations this year.

In the following congratulatory address, Chairman Morihiro Nagahori of the Board of Trustees noted that the presentation of an honorary doctorate to Minister Schavan was “a new first step in Japanese and German education,” and thanked Minister Schavan and others once again for visiting the university.

We hope that this presentation of an honorary doctorate to Minister Schavan will lead to the further development of exchanges between Meiji University and German educational and research institutions.

[Biography of Minister Annette Schavan]
Minister Schavan was born in Jüchen, Germany in 1955. From 1974 she studied education, philosophy, and Catholic theology at the University of Bonn and the University of Düsseldorf and received a doctorate in philosophy in 1980. She served as Head of Cusanuswerk from 1991, Minister of Culture, Youth and Sports of the Federal State of Baden-Württemberg from 1995, Vice-Chairwoman of the Christian Democratic Party Germany from 1998, and Member of the State Assembly of Baden-Württemberg from 2001. Since 2005, she has been serving as Federal Minister for Education and Research.