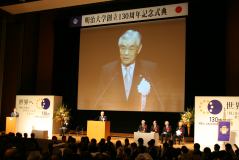 A scene from the ceremony 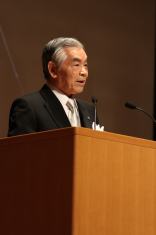 Chairman of the Board of Trustees, Morihiro Nagahori 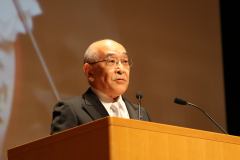 Meiji Law School, the predecessor of Meiji University, was founded in 1881 by three young lawyers, Tatsuo Kishimoto, Kozo Miyagi, and Misao Yashiro, and, after a history of changing times, Meiji University marks its 130th anniversary this year.

The concept of the 130th anniversary commemoration project is “To the World, Empower the Individual, Link to the World and the Future.” The university’s founding philosophy, “rights, liberty, independence and self-government,” have been passed down to this day and in this anniversary year, the university takes a new step in aiming to be a world-class university in the international community, through high quality education, enhancement of research, and fostering of global human resources, as an “Open Minded University.”

One thousand guests from Japan and abroad and university officials attended the ceremony.

Chairman Nagahori of the Board of Trustees stated, “We will make further efforts to evolve as a global education and research hub that delivers proposals to the world. In order to continue to be a hub for ‘the creation of new knowledge’ and ‘foster human resources that can meet the needs of the times,’ we must imprint in our minds the philosophies and many lessons accumulated over the span of 130 years and pass them on to the next generation.”

Meiji University President Naya, touching on the uncertain situation in Japan following the Great East Japan Earthquake, declared his strong determination saying, “Now is the era of Meiji University. Imagining the world twenty years from now, when the students of today will hold important positions in society, we will seek to nurture and develop human resources with the spirit to push ever onwards through whatever difficulties they may face.”

Representing the guests, congratulatory addresses were given by Minister of Education, Culture, Sports, Science and Technology Masaharu Nakagawa (read by Administrative Vice Minister Kiyoshi Shimizu) and President of Keio University and President of the Japan Association of Private Universities and Colleges, Atsushi Seike. Additionally, a congratulatory telegram from Prime Minister Yoshihiko Noda with a message to the university was read out: “I hope that Meiji University will continue to grow as one of the top private universities in Japan and continue to contribute to our nation’s learning, research, and education.”