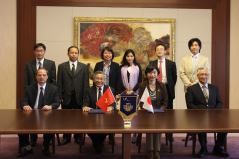 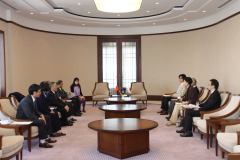 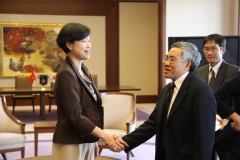 On April 10 officials from the Vietnam National University - Ho Chi Minh City, University of Social Sciences & Humanities visited the Surugadai Campus, and held a meeting with Vice President Etsuko Katsu (in charge of international exchanges), Dean of the School of Political Science and Economics Kosaku Dairokuno, specially-appointed professor in the Organization for International Collaboration Shingo Ashizawa, specially-appointed associate professor in the Organization for International Collaboration Takashi Sekiyama and others regarding the specific content of the initiatives in the cooperation agreement between the two universities.

The Vietnam National University - Ho Chi Minh City, University of Social Sciences & Humanities is one of the largest universities in southern Vietnam and it is also actively focusing its energies on international collaboration. Furthermore, the university has established a course majoring in Japanese Studies and is also actively engaged in Japanese language education, so mutual acceptance of students and contributions in academic areas, such as researcher exchanges with Meiji University educators, etc., are expected.

In the meeting Vice President Katsu mentioned the current social conditions in Vietnam and also stated her hope that “Japan and Vietnam will have close relations going forward. For its part, Meiji University also wants to strengthen relations.” Moreover, she introduced the exchange programs run by the School of Political Science and Economics with Northeastern University and University of Southern California in the United States and Srinakharinwirot University in Thailand, and the meeting participants held an exchange of opinions about the specific initiatives.

Dr. Le Huu Phuoc, Vice-President of Vietnam National University - Ho Chi Minh City University of Social Sciences & Humanities, expressed his hope for stronger collaboration going forward, saying “in Vietnam, interest in Japan is high and there are a very large number of students studying the Japanese language. Therefore I would like to enhance the content of our cooperation agreement.”