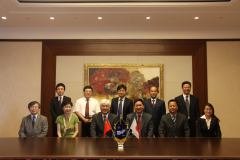 Trustee Harigaya (front-left) and Vice Secretary Chen
On May 21 Meiji University received a visit from Vice Secretary Chen and her delegation from the Yunnan University of Nationalities in China, and trustee Toshio Harigaya, Vice President Etsuko Katsu (in charge of international exchanges), professor in the School of Arts and Letters Yasunori Kegasawa, and associate professor in the School of Law Akimasa Kawano held an informal chat with the visitors in the VIP room on the 23rd floor of the Liberty Tower on the Surugadai Campus about educator and student exchanges. Meiji University concluded an agreement with this university on December 24, 2008. In September 2011 trustee Toshio Harigaya (then a vice-president of Meiji University) attended a ceremony marking the 60th anniversary of the Yunnan University of Nationalities.