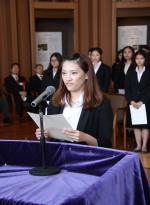 Ms. Vichuta giving her address at the completion ceremony as the representative of the short-term exchange students 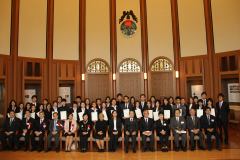 The students receiving their program completion certificates with beaming smiles on their faces in the commemorative photograph
Based on an interuniversity agreement between Meiji University and Srinakharinwirot University, a national university of Thailand, a School of Political Science and Economics program for accepting short-term exchange students was implemented from April 16 to May 11. A total of 34 students from three faculties and the single graduate school of Srinakharinwirot University came to Japan for the program, which was being implemented for the second time. The students spent a rich and rewarding month in Japan, which included lectures, tours of facilities, exchanges among the students, etc.

The exchange students took special lectures in English (11 class periods). They also went with the “supporter students” from the School of Political Science and Economics, who provide backup support for the daily lives of the exchange students, to tour facilities such as the National Diet Building, the Tokyo Stock Exchange, NTT DoCoMo, JAL, etc., in order to experience the forefront of politics and economics in Japan. Moreover, the exchange students and the supporter students greatly deepened their exchanges with each other, for example by holding discussions about the politics, economies, and cultures of their respective countries at the Yamanaka Seminar House.

The program completion ceremony was held on the last day of the program, May 11, and Singtong Lapisatepun, Minister and Deputy Chief of Mission at the Royal Thai Embassy, Japan and his entourage were also present. The short-term exchange students received each of their program completion certificates from Dean Kosaku Dairokuno with beaming smiles on their faces.

After the completion ceremony, we held a farewell party welcoming guests from the Ministry of Foreign Affairs and the companies visited by the exchange students. The party was also attended by Meiji University officials including President Kenichi Fukumiya and trustee of academic affairs Kazuto Iida. We celebrated the success of the program and prayed for the further development of both universities.

Ms. Vichuta Saengvongkij (a third year student at the Faculty of Social Science), who plans to study at the School of Political Science and Economics from September as one of the first group of exchange students between Meiji University and Srinakharinwirot University, was full of hope, saying “the short-term study abroad this time was good preparation before my long-term study abroad. In my long-term study abroad starting in September, I want to learn about the national character of the Japanese people, namely the diligence and politeness of the people, and the economic structure of Japan, and use my studies for the benefit of my future career.”

Mr. LAI Tanyawat (first year student at the Faculty of Humanities), who says he became interested in Japan after seeing Japanese anime and has studied the Japanese language for four years, was very excited, saying “the lectures in which we learned about international relations between Japan and Asia were very interesting. I want to improve my Japanese language ability further and get a job which connects Thailand and Japan.”