Participants listening to a lecture on Criminal Law. 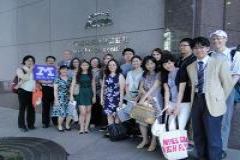 Visit to a “behind the scene player” that supports a variety of corporate activities. (ITOCHU Corporation legal department) 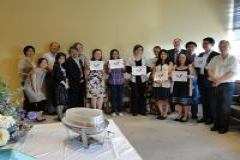 The culmination of ten days of intense study. (completion certificate presentation)
The School of Law held its summer short-term Meiji University Law in Japan Program from July 23 to August 3. This two-week program taught the basics of Japanese law and legal systems to participants from abroad.

The program was planned in 2009 as a new educational program to develop Meiji University as an international educational institution that plays a part in the Project for Establishing Core Universities for Internationalization (Global 30). This year marked the fourth time the program was held, and it was again adopted by the Japan Student Services Organization as a “Student Exchange Support Program (Short Stay)” that supports acceptance of short-term students from abroad.

This year, ten students and working people from a variety of regions—Germany, the United Kingdom, Brazil, Mexico, China, Singapore, and Taiwan—participated in the program. A total of 12 lecturers held lectures all in English. They included a core of six teachers from the School of Law plus lecturers involved in a variety of aspects of current legal systems from the School of Commerce and Law School as well as professionals.

Lectures covered current issues in individual legal fields such as Constitutional Law, Criminal Law, Criminal Justice, Civil Process, Family Law, Law of Enterprises, Competition Law, Tax Law, Information Law, Intellectual Property Law, and International Law. The main feature of this program was that the curriculum allowed participants to understand the characteristics of Japan’s laws and legal systems in their social, cultural and historical context by covering the development of legal systems from the Meiji era, Japan’s judicial system, and more.

Feedback from abroad stated that the basic parts of legal fields, themes, and other aspects covered in classes were well encompassed for participants with diverse levels of knowledge and interest in law and various backgrounds. In that way, the program sufficiently meets the needs of learners.

Field trips were also made to the Supreme Court, a district court, a summary court, a corporate legal department, a law firm, a prison, and the Diet (House of Representatives' Legislative Bureau). These trips aimed to make the knowledge learned in lectures more practical and enriching. In particular, participants eagerly asked many questions at visits to locations with deep connections to foreigners. Such locations included the House of Representatives' Legislative Bureau and the Tokyo Regional Immigration Bureau Haneda Airport District Immigration Office, in which students had high interest and satisfaction in visiting, as well as the prison (Yokohama Prison Yokosuka Branch for the 2012 program), which was also of high satisfaction to participants the previous year.

On the final day, completion certificates were presented and a farewell party was held. Slides of photos taken during the program were shown at the event, and participants and lecturers talked about their experiences.

We hope that many participants from abroad will take part in this program again next year.

Excerpts from feedback from participants

•The lecturers were fluent in English, and they were able to explain Japanese culture and laws in an easy-to-understand  manner.

• It helped in understanding Japanese law that we were able to receive explanations from and ask questions to actual judges and court personnel after observing the court procedures.

• The program schedule was planned very well and even though it was a hot and muggy season, I was able to stay motivated throughout the program.