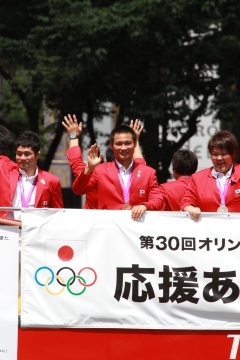 [Judo] In the men’s -66 kg event, Masashi Ebinuma (School of Commerce, class of 2012) won the bronze medal. After advancing to the third place play-off, Mr. Ebinuma scored an ippon against Polish competitor Pawel Zagrodnik to win the bronze medal.

[Table Tennis] In the men’s team event, Jun Mizutani (School of Political Science and Economics student) won fifth place. After a sweeping 3-0 victory in the first round against Canada, Japan played against Hong Kong in the quarterfinals. While Mr. Mizutani won two games, Japan lost the match 2-3 and placed fifth.

Below is a list of the results of Meiji University students and alumni (athletes).

[Football] The National Women’s Football Team led by Head Coach Norio Sasaki (School of Arts and Letters, class of 1981) won the silver medal. The Japanese National Women’s Football Team advanced in the first round with one win and two draws. In the quarterfinals, they won 2-0 against Brazil and in the semifinals, 2-1 against France. While Japan ultimately lost to the United States 1-2 in the final, the team won Japan’s first Olympic silver medal for football in Japanese football history.

[Volleyball] The National Women’s Volleyball Team led by Coach Kiyoshi Abo (School of Political Science and Economics, class of 1993) won the bronze medal. The Japanese National Women’s Volleyball Team advanced in the preliminary round with three wins against two losses. In the quarterfinals, they won 3-2 against China. They lost 0-3 to Brazil in the semifinals, but won 3-0 against South Korea in the third place play-off, winning a bronze medal for the first time in 28 years.

Below is a list of the results of Meiji University students and alumni (head coaches, coaches, and staff).

*In the judo women’s -70 kg event, a Columbian athlete led by Head Coach Noriyuki Hayakawa (School of Political Science and Economics, class of 2003) won the bronze medal.
Back
News & Events