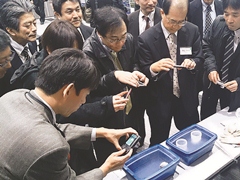 a glimpse of the keen interest in actual methane hydrate samples. 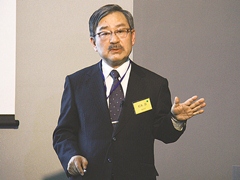 【Organization for the Strategic Coordination of Research and Intellectual Properties】

On January 23, Meiji University joined with the National Institute of Advanced Industrial Science and Technology in hosting a forum titled "Toward Transformation of Shallow Methane Hydrate into a Resource" at the Global Hall on its Surugadai Campus.  Methane hydrate is an ice-form solid substance produced by hydrocarbon gases such as methane or ethane and water molecules.  It is also called "burning ice" because it burns when lit by fire.  It is attracting attention as a new energy resource capable of use for power generation and city gas.  There are two basic types: a sand stratum type deposited in sand strata located 250 - 300 meters below the sea floor at a depth 1,000 - 2,000 meters, and a shallow type found in the form of massive aggregate a few tens of meters below the sea floor at a depth of 500 - 1,000 meters.  The former is found in the Nankai Trough off Japan's Pacific coast, while there are widespread deposits of the latter in the Sea of Japan.
A research team led by Dr. Ryo Matsumoto, Project Professor and Director of the Meiji University Gas Hydrate Laboratory, was commissioned by the Agency for Natural Resources and Energy in the Ministry of Economy, Trade and Industry to carry out a study on shallow methane hydrate deposits in the Sea of Japan.  For this purpose, the team made several survey voyages in the Sea of Japan off the Joetsu district and west of the Noto Peninsula from June to October of 2013.  At the forum, the members presented a report on the results of their surveys of topographic and geological conditions and the peripheral environment.
Back
News & Events