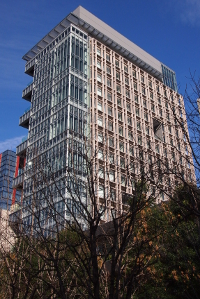 Global Front
The Open Online Education Promotion Council (JMOOC) held a new spring lecture in the Global Front on the Surugadai Campus on February 3.  Titled "Development of Japanese-edition MOOCs to Open up the Future of Online Education," the lecture attracted a crowd of about 300, more than had been expected.  It was also screened at the multi-use hall adjacent to the Global Hall, which was the main venue.

"MOOC" stands for "massive open online course," and refers to lectures at prestigious universities or by noted professors around the world that can be viewed online, free of charge, by anyone, anywhere in the world. MOOCs are consequently attracting considerable attention inside and outside Japan as a new type of educational service.  The most prominent examples are Coursera, which was instituted by professors at Stanford University, and edX, which was established mainly by Harvard University and the Massachusetts Institute of Technology.  The JMOOC was established to promote Japanese-language MOOCs last autumn.
Back
News & Events