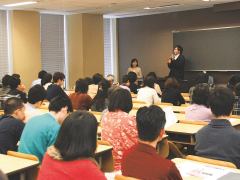 On March 15, the Support Center for Earthquake Reconstruction and other parties co-hosted the screening of the documentary film, the title of which is translated as “When cherry-blossoms bloom in that town” and which depicts activities by people who planted cherry trees at tsunami-affected points in Rikuzentakata city, Iwate Prefecture, at the Surugadai Campus.

The film conveyed the activities by an NPO, “Sakura Line 311”, which aims to carry down to the future generations of the threat of earthquakes and tsunami by connecting tsunami-affected points in Rikuzentakata city with 17,000 cherry trees. Thus the film emphasized the importance of enhancing awareness for preventing and mitigating disasters. In the film, the representative of the NPO describes that “what drives the activities is the deep regrets not having been able to save the loved ones”. The film also includes footages of people involved in the “Sakura Line 311” activities, an interview with Mr. Futoshi Toba, Mayor of Rikuzentakata, etc., all called for people's awareness of 'mitigating disasters' as they could happen to anyone.