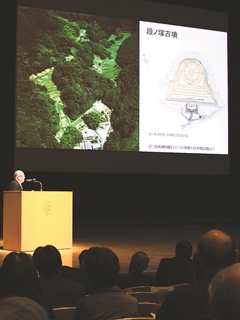 On March 15, one of our research clusters, Research Institute for Japanese Ancient Studies (Director: Professor Takehiko Yoshimura, School of Arts and Letters) and the council for promoting the registration of Asuka-Fujiwara as a world heritage site hosted a seminar under the title of “Great Appeal of Asuka-Fujiwara to Convey to the World” at the Academy Hall of the Surugadai Campus, aiming for the registration of the “Asuka-Fujiwara Archaeological sites of Japan's Ancient Capitals and Related Properties” in Nara Prefecture. At the seminar, Professor Emeritus Hatsushige Otsuka of Meiji University and Dr. Wang Wei, Director of the Institute of Archaeology of the Chinese Academy of Social Sciences, gave commemorative speeches; a theater group “Jikuu” from Asuka-mura performed; and the lecturers, Professor Yoshimura, and Professor Emeritus Masashi Kinoshita from Tokyo Gakugei University participated in a talk session. Together with the audience of approximately 800, all at the venue traveled back in the era of Asuka from late 6th century to the beginning of 8th century during which Japan as a country formed its foundation.
Back
News & Events