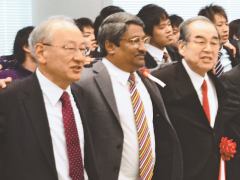 On March 9, our Table Tennis Club’s victory in the 2013 Kanto Students Spring/Autumn League was celebrated at the Academy Common of the Surugadai Campus. Chairman Kenso Hidaka, President Kenichi Fukumiya and other university executives honored the athletes who achieved the victory.