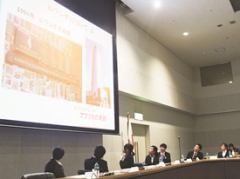 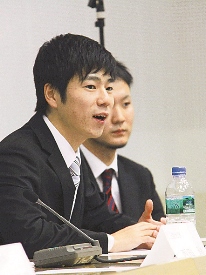 Meiji University student Kazushige Tsumita (senior-year student of the School of Political Science and Economics) presented a report upon returning from six months participation as a United Nations Youth Volunteers. The presentation was held on March 27 at the United Nations University in Shibuya Ward, Tokyo.

Tsumita, who had a strong interest in the growth of developing countries, was stationed from September last year to March this year at the UNV office in the Republic of Rwanda in the center of the African continent. He and the multinational staff with people from Rwanda, Belgium, and other countries were in charge of public affairs, including planning, notifications, activity reports, and running events for International Volunteer Day. Because the office was a relatively small operation, when he wasn’t busy with his main work he participated in other activities, such as youth employment promotion activities in cooperation with other institutions, including the International Labour Organization (ILO) and United Nations Communications Group (UNCG), which not only kept him busy but also gave him ample opportunity to polish his skills with foreign languages and information and communication technology.

Looking back, Tsumita wishes he would have been able to play a larger role in the development and youth employment promotion activities. “Thinking about what my role is in the organization and fulfilling my assignments made me really feel like I was contributing to the world.” He is passionate about his ambitions, “I want to complete graduate school and continue developing expertise so I can realize my ideal of playing a leading role in work on the world stage.”