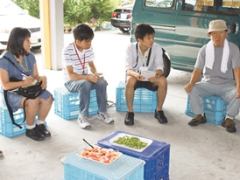 Fieldwork under way in Tendo City. (From the left) Hasegawa, Numata and Murayama 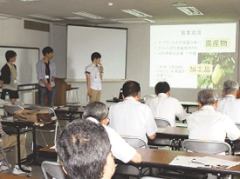 At the recommendation of a group of Meiji University students, Tendo City in Yamagata Prefecture, the birthplace of Kozo Miyagi, one of the Meiji University founders, adopted a regional revitalization policy that includes utilization of the local Furusato (hometown) Tax Break*. In two weeks starting on April 1, the Tendo City's campaign for donations advocated by the students attracted over 1,300 people, prompting city managers to say they were surprised by the unexpectedly large number of people applying for the tax break and overwhelming response.

The group of three students— Masato Murayama (senior-year student of the School of Law), Eri Hasegawa (senior-year student of the School of Political Science and Economics) and Koki Numata (third-year student of the School of Law) —took time from their activities in Social Cooperation Organisation to visit Tendo City last summer to announce the campaign with the slogan, “Think of Tendo as your second hometown.” The three students first started focusing on the Furusato Tax Break started in the 2008 program year. Tendo City was recording an average of about 12 donations under the tax break system each year and most of the donors were from inside the city. To promote donations from outside the city, the students proposed the mayor to begin providing gifts of locally made goods and complimentary tickets to hot springs to people who donated 10,000 yen or more.

Tendo City decided to highlight the system because it believed it would be “extremely beneficial recommendation for raising the visibility of the city.” Collections during a two-week period beginning April 1 gathered pledges from 1,373 valued at some 16 million yen. The city plans to show its appreciation by sending donors gifts of locally made goods, such as cherries, pears, grapes, rice and sake.

*The Furusato (hometown) Tax Break
It is a system allowing a certain amount of tax deductions when a donation is made to a person’s home town or a community group they wish to support. Donation amounts above 2,000 yen may, in principle, be deducted from the donor’s income tax or inhabitant tax.
Back
News & Events