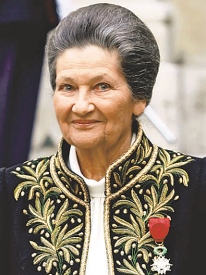 Politician and Lawyer Simone Veil’s extensive history of social contribution, particularly her championing of human rights and raising the status of women, and enormous contribution to advancing world peace is the very embodiment of Meiji University’s founding philosophy of “Rights, Liberty, Independence and Self-government” over the past half century.

The university was founded as the Meiji Law School in 1881 by the three young lawyers Dr. Tatsuo Kishimoto, Dr. Kozo Miyagi, and Dr. Misao Yashiro.
Their desire to create a school originated in lessons they attended in 1873 on French law and human rights given by University of Paris legal scholar Gustave Boissonade at the invitation of the Meiji government. Dr. Kishimoto and Dr. Miyagi later attended the University of Paris, where Mme. Veil would also later study.

The connection between the two universities has extended through the years and come full circle in 2011 on the 130th anniversary of Meiji University’s founding. Meiji University awarded an honorary doctorate to Mme. Veil for her efforts to spread the university’s distinct determination and message of “peace, respect of human rights, and universal justice” around the world.

Mme. Veil, expressing her admiration of the Meiji University philosophy, granted a specified contribution to the school, which was used to establish the Meiji University Simone Veil Foundation. The foundation’s funds will be used to encourage academic research in human rights, gender issues and equality, and French culture and society.

The foundation recently conducted its first program. Below are Mme. Simone Veil’s biographical information and a list of awards and honors she has received.
(Professor, School of Science and Technology)