Walking around Nakano with an old map in hand 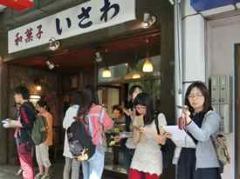 Around May 4 every year, “Jane’s Walk” events (walks around local cities) are held in more than 100 cities around the world. This year was the first time the event was held in Japan, with Tokyo and Kyoto acting as host cities. In Tokyo the event was hosted on May 4 in and around Nakano Campus by students majoring in Frontier Sciences and Innovation at the Graduate School of Science and Technology. There was a total of 67 participants on the day including members of the general public. The group divided into six courses, with Meiji University teaching staff acting as guides. The walks were an excellent opportunity to rediscover the beauty of Nakano Campus and its surroundings.

The event is named after author and activist Jane Jacobs, one of the most influential thinkers in the field of urban studies in the second half of the 20th Century. It is held around her birthday, May 4. Jane’s Walk began in Toronto, Canada (where Jane Jacobs spent her final years) in 2007, the year after her death. Two years later it had spread to 24 cities across North America and it has now become a global event in which more than 10,000 people take part.