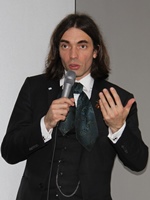 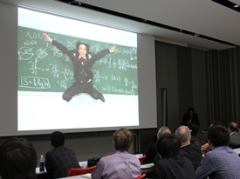 Explanation of equations with witty photos
On May 16, during the run of the European Higher Education Fair 2014, Dr. Cédric Villani, winner of the Fields Medal, which is regarded as “math’s Nobel Prize,” delivered a special lecture at the Global Front on Meiji University’s Surugadai Campus.

The Fields Medal is the world’s most authoritative award in the sphere of mathematics, and is presented once every four years to mathematicians aged no more than 40 who have made outstanding achievements in research. Dr. Villani received the honor in 2010 for the results of his studies concerning Landau damping and the Boltzmann equation. In his lecture, which drew an audience of more than 120, he described these studies and his current activities.