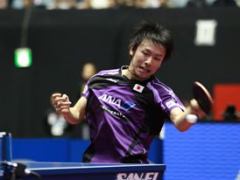 Niwa is being looked to as the next ace on the Japanese team
One current student and one former student of Meiji University were on the Japanese team at the Zen-Noh 2014 World Team Table Tennis Championships held in Tokyo at Yoyogi No. 1 Gymnasium and other venues over the eight-day period April 28–May 5. The two were Koki Niwa, a second-year student in the School of Political Science and Economics and member of the Meiji University Table Tennis Club, and Jun Mizutani, who graduated with a BA from the School of Political Science and Economics in 2013, and is now employed at DIO Japan, Inc. The event (Japan Table 2014) attracted the participation of 120 male and 100 female entrants from a record-high total of 125 countries and regions, and saw plenty of exciting, hard-fought matches.

Niwa and Mizutani made vital contributions to the Japanese team’s capture of the bronze medal. It was the fourth consecutive year in which the Japanese team won a medal at the championships. We are all looking forward to a strong showing from them in the years leading up to the Tokyo Olympic Games six years later.