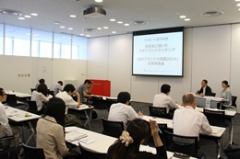 Scene at the press conference for announcement of the university brand rankings
On July 17, the Recruit Academic Admissions Research Institute released university brand rankings among high school students (based on its 2014 survey of brand power for attracting applications). In the rankings of universities to which students in the Kanto area wanted to apply, Meiji University ranked first for the sixth consecutive year. As in 2013, Meiji University had the No.1 spot to itself in all four categories (male/female and humanities/sciences) (in the Kanto area in each category).
Back
News & Events