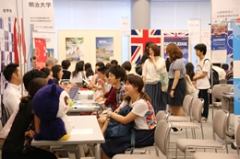 The atmosphere around the booths for individual consultation was charged with the enthusiasm of the participants.
On July 19, the Headquarters of International Collaboration (Meiji University Vice President Etsuko Katsu, Director) held the Study Abroad Fair 2014 on the Academy Common on the Surugadai Campus. This was the third installment of the Fair, which is jointly sponsored by embassies of English-speaking countries. The Fair was attended by about 500 people, consisting not only of Meiji University students but also students of junior high and high schools and other universities, as well as adults currently not in school.
Back
News & Events