Meiji University hosted the Study in Japan Fair in Paris 2014 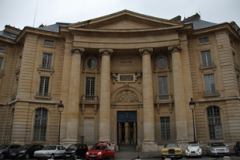 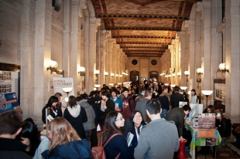 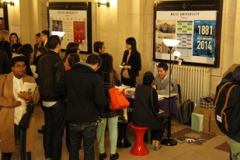 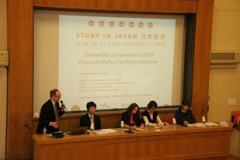 Speakers in the seminar
The Organization for International Collaboration held the “Study in Japan Fair in Paris 2014” at Université Paris 1 Panthéon-Sorbonne on Sunday November 16, 2014. The fair attracted around 540 visitors, most of whom are university students in France.

This “Study in Japan Fair in Paris 2014” aimed to further encourage academic exchange between Japan and France by disseminating information widely on research and educational activities at Japanese universities, entrance exams, and scholarships for studying in Japan, to high school and university students and others interested in studying in Japan. Meiji University hosted a study in Japan fair in Paris last year for the first time and organized the 2nd one this year.

16 Japanese universities set up booths in the venue while 5 ones participated in the fair by exhibiting their brochures. Also the Embassy of Japan in France (Ambassade du Japon en France), the Japan Cultural Institute in Paris (Maison de la culture du Japon à Paris), and Japan Society for the Promotion of Science (JSPS) Strasbourg Office opened booths to communicate closely with visitors.

Seminars were given in parallel with the exhibitions; 1.Why choosing Japan?, 2.Technology in Japanese Society, 3.How to go to study in Japan, and 4.Working in Japan?. A representative of the Japanese Embassy presented why studying in Japan is appealing and one of JSPS Strasbourg Office addressed research and education environment to the audience. French students and researchers who have been in Japan spoke their first-hand experiences of learning or working in Japan too; a former exchange student to School of Global Japanese Studies, Meiji University contributed to the session as well. All the sessions were full of the audience and they got involved in active discussion with the presenters, which showed high interest of visitors in studying in Japan.