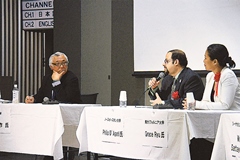 On March 12, Meiji University held an international workshop titled “Effects of Short-Term Study Abroad Programs on the Mindsets of Their Participants” at the Global Hall on its Surugadai Campus. The workshop was prepared as a program under the Go Global Japan Project promoted by the Ministry of Education, Culture, Sports, Science and Technology to support development of global human resources to drive social and economic advancement.
In recent years, the number of Japanese nationals going abroad to study has been declining. Some experts are pointing to a trend toward “turning inward” among Japan’s youth. In this atmosphere, the number of students sent overseas by Meiji University in academic year 2013 was up about 30 percent from academic year 2012.
Back
News & Events