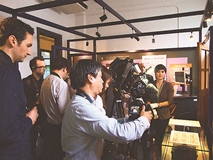 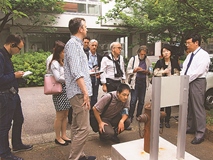 On May 29, Meiji University, through partnership with the Foreign Press Center/Japan (FPCJ), provided a tour for foreign correspondents (press tour). Part of the tour was the defunct Imperial Japanese Army Noborito Laboratory Museum for Education in Peace, which is located on Ikuta Campus.Thirteen members of the press (e.g., journalists and photographers) from five different countries- the United States, France, Switzerland, China (including Hong Kong), and Korea- participated in the tour.
It appeared that the foreign correspondents were able to get a true sense for how terrifying and tragic war is as well how precious peace is, as they were able to get a firsthand taste of the Noborito Laboratory, where weapons and equipment for "secret war activities" (counter intelligence, espionage, conspiracy, and advertising), which are hidden elements of war, had been developed.