First Annual "Lecture and Seminar on Photography (a program of the Japan Foundation): "Samurai in Meiji Japan and Cosplay" Held 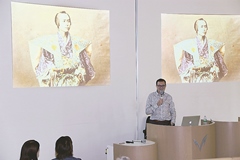 Meiji University will be holding the "Lecture and Seminar on Photography," a program of the Japan Foundation, on three occasions. Claude Estebe, who is an expert on photography history, was invited as a guest speaker.The first lecture and seminar, entitled "Samurai in Meiji Japan and Cosplay," was held on June 4 at Izumi Campus Library Hall.
The program aims to contribute to the development of Meiji University's educational and research activities by inviting foreign scholars (those who are well educated and have a an advanced track record for research) to give lectures or seminars or engage in joint research projects.
In his lecture, Mr. Estebe presented a slide show of photographs of samurai from the 19th century, which had been a popular theme for photography at the time, and pointed out that many of the samurai in the photographs were not real and were models who were dressed as samurai, which was an expression of the collapse of the samurai class.The audience showed an interest in the many cosplay photographs in which researchers from Europe and the United States are unable to recognize that the samurai are fake.