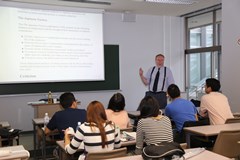 Lecture by Dr. Heinrich Menkhaus, Professor of the School of Law 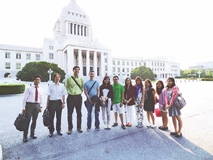 The classes were taught by 13 teachers from the Meiji University School of Law, School of Commerce, and Law School, and other Schools, and took up subjects including constitutional law, family law, competition law, intellectual property law, international tax law, labor law, and the judicial and legal systems. Dr. Heinrich Menkhaus, Professor of the School of Law, taught the class on labor law. He described and commented on the features of Japanese companies, and changes in the same, identified in the book “The Japanese Factory” (1958) by James Abegglen, an American scholar in the field of business management , such as lifelong employment, the seniority system, and in-house labor unions.
In his remarks, he also touched upon matters including the employment rate among women, the minimum wage, and permanent part-timers. The students listened earnestly to his comments.