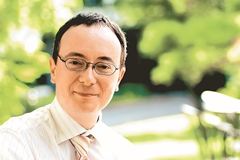 Dr. Franck Michelin
The 32nd Shibusawa Claudel Prize (co-sponsored by La Maison Franco-Japonaise and The Yomiuri Shimbun) was awarded to Dr. Franck Michelin, a member of the Organization for International Collaboration and Associate Professor of Meiji University, for his doctoral thesis titled “French Indochina before the Pacific War and the Southern Advance of Imperial Japan” (tentative English translation of the Japanese title; published by Sorbonne University in Paris, in 2014).
The Prize is awarded in Japan and France for outstanding research work related to each other’s culture. Each year, one recipient is selected in both countries. In Japan, the Louis Vuitton Special Prize has also been awarded to one candidate since the third time.
Associate Professor Michelin was given the award in recognition of his formidable Japanese-language skills that enabled him to carefully collect and examine documentation in the original Japanese, and his meticulous research extending over a period of nearly ten years. His selection won the unanimous approval of the judges. At Meiji University, a total of three teachers in the School of Political Science and Economics have been given the award as Japanese candidates. Associate Professor Michelin is the first Meiji University professor to receive it as a French candidate.

Dr. Michelin’s comments in accepting the Prize: “This research has further deepened understanding of the historical facts of Japanese-French relations and Japanese diplomacy. This year marks the 70th anniversary of the end of the Pacific War, and I am happy to have been chosen for this award in it. I am determined to continue my efforts to play a role in the re-evaluation of Japanese-French relations and the deepening of mutual understanding between our countries.”