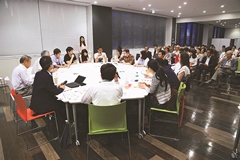 On July 7, there was a gathering for an exchange of views between foreign nationals, who are studying at Meiji University and Waseda University, and Mr. Daisuke Tanaka, Mayor of Tokyo’s Nakano Ward. The gathering was held in the lounge on the sixth floor of Meiji University’s Nakano Campus. The students, who are both living and studying in Nakano Ward, engaged in a frank exchange of views with the mayor on the appeal of the ward and tasks for its internationalization.

The gathering was sponsored by the Keizo Yamawaki Seminar in the School of Global Japanese Studies, and took “From Japan to the World – Aiming to Make Nakano a Global City” as its theme. The participants consisted of seven students enrolled in the Meiji University School of Global Japanese Studies and five living in the dormitory for international students at Waseda University, which lies next to the Nakano Campus.

The first topic in the discussion, which was moderated by Professor Yamawaki, was “requirements as a global city.” One second-year student at Meiji University asserted the need for points of interpersonal contact to build connections between ward residents and foreign nationals. Another student (first-year at Waseda University) made an observation that reflected the perspective of a foreign student, insisting that English names such as “Central Park” and “Broadway” (for places in Nakano Ward) were not liable to make a deep impression on people from other countries.

Asked about "Nakano’s appeal," a third-year Meiji student cited the abundance of greenery, and a first-year Waseda student, the convenient transportation and many affordable yet quality restaurants. As for issues, difficulties encountered by foreign nationals in renting were mentioned by a fourth-year Meiji student, and inconvenience resulting from the lack of wireless LAN for public use, by a first-year Waseda student.

In response to these comments, Mayor Tanaka said: “I was glad to hear so many proposals. What stuck in my mind most was the idea that, before considering various initiatives, we should prepare an environment conducive to smooth communication among people.

The gathering closed with remarks by Professor Yamawaki, who voiced his aspirations for the future in the following words: “It was very worthwhile for students from other countries at Meiji and Waseda to exchange ideas with Mayor Tanaka on globalization in Nakano Ward at this gathering. I hope to link the results to a platform for wider participation by these students in the community life.”