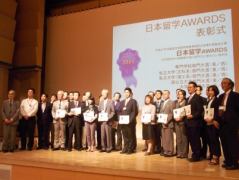 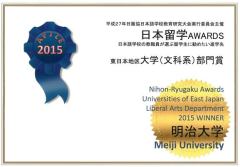 For the fourth consecutive year, Meiji University ranked first in the Nihon-Ryugaku Awards (awards that recommend universities to international students) in the East Japan Liberal Arts Department as a choice for recommendation by Japanese-language schools nationwide.

The Awards were instituted in 2012 by the executive committee of the Convention for Promotion of Education and Research of Japanese-Language Schools, for the purpose of contribution to conditioning of the environment for the many students in other countries who want to pursue further studies in Japan. This year, a total of 471 votes were received from teachers and staff in 166 Japanese-language schools across the country. They selected a total of 41 top-ranking schools in 10 categories, five each in eastern and western Japan: Specialized Schools, Liberal Arts (private universities), Science and Engineering (private universities), National and Other Public Universities, and Graduate Schools.

On August 10, the top schools in each category were commended at the award ceremony conducted at the National Olympics Memorial Youth Center in Tokyo’s Yoyogi district. In the East Japan Liberal Arts Department, Meiji University surpassed the other three top-ranking schools (Seigakuin University, Meikai University, and Waseda University) to rank first and take the crown for the fourth consecutive year.

Page related to this article