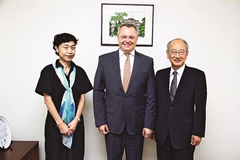 On August 21, the Honorable Egidijus Meilunas, Ambassador Extraordinary and Plenipotentiary of the Republic of Lithuania to Japan, paid a courtesy visit to the Surugadai Campus. There, he conversed genially with Meiji University President Kenichi Fukumiya and Vice President Etsuko Katsu (in charge of international collaboration) on programs of academic interchange with Lithuanian universities and other matters in the President’s Office.