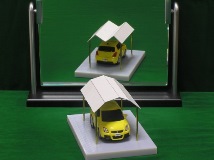 The exhibit introduces the weird world spawned by optical illusions. It centers around illusory objects, such as anomalous objects that appear to realize trompe d’oeil paintings, objects that appear to create impossible motion (such as a ball rolling up a slope), and ambiguous objects whose shapes change when reflected in a mirror. The exhibit items number 20 objects, two videos, and 10 tapestries.