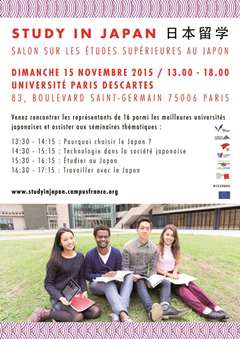 Meiji University will host the “Study in Japan Fair in Paris 2015” on Sunday November 15th 2015 at Université Paris Descartes. Meiji University has had long relationship with France. It was originally founded in 1881 by three young researchers of French laws. Also Meiji had been the chair of Consortium japonais du Collège doctoral franco-japonais that was ended in 2010.

In 2013, Meiji University hold the Study in Japan Fair for the first time in Paris in collaboration with Campus France, a French government agency for promoting student mobility and organized the same fair in 2014 too. This year, the fair will be organized again to further promote student and academic exchange between Japan and Frances.

The fair aims to share information such as Japanese higher education system, entrance exams and scholarships with visitors as prospective students. In addition, several seminars for French students will be offered. 16 Japanese universities of Global 30 universities, Top Global Universities, as well as some of member universities of the said Consortium will exhibit in its booth to interact with visitors while 3 universities will join the fair by providing their brochures.

<Registration>
Visit the following website for details and registration.
http://studyinjapan.campusfrance.org/